The passing of the Baton

It started in 1998. It started when I buried my mom. She had just turned 50, twenty two days prior. She had been suffering from severe depression and lost the battle by taking her own life. At that soul crushing moment, that moment that changes you forever, I made a vow to myself that my life would never lead to that point. I would be vigil. I would figure it out. I would overcome. I would survive.

And I did. I'm 50. I'm not suffering from depression. I'm very healthy - physically, mentally and spiritually. I'm happy. I'm so happy. I have no desire to leave this world. In fact, I can tend to fear leaving because I love life so much and I want to be here to savor every last moment. I want to live!  I'm standing on the top of the mountain screaming, "We did it Mom. We did it!"

And then it hits me. It's over. I've climbed the mountain. I conquered the beast. This journey, that somehow kept me connected to my mom, is over. The path that lies ahead of me hasn't been traveled before. My mom didn't ever walk these grounds. I'm not picking up the pieces as I move forward, repairing trails. I've now entered uncharted territory. No footprints lay ahead of me. I am travelling alone.

For a moment I sit in the sadness of it all. For the last 21 years, I was fighting a battle for the both of us. The journey to the top was hard. The obstacles were rocky. I got lost. I was battered and bruised. I sat terrified in the darkness for many lonely nights. I wish she had walked it with me. I wish we could have done it together.

I imagine the two of us standing at the top together, our arms linked, with the biggest smiles on our face. I imagine sitting with her and asking her how she felt when she turned 50. I want to hear her stories. I want to know my mom as a person. I want to know her as a woman, not just as my mom. Why does it take us so tremendously long to see our parents as people? People who were just like us once. People with their own battles to fight. I was only beginning to see my mom in that light when she died. I missed so much of her life and she missed so much of mine.

I would have loved to watch her with her granddaughters again. She never even met her grandson. I could have really used her presence during my divorce. She could have met my new husband and watched me experience a normal marriage, and happiness. She missed my 2nd wedding and her granddaughter's wedding. She missed meeting her other grandchildren, my niece and nephew. She missed so, so much; so many Christmases and holidays; so many tears; so many memories; so many moments. She could still be here, on the top of this mountain with me. Instead, I'm standing here alone.

Part of me wants to rage. Part of me wants to yell at the top of my lungs, "Why Mom, why? How could you ever think we would be better off without you? How could you choose to leave our lives when you had so much left to live? I needed you here Mom. I needed you here." And then I remember that the person who left us that day was ill. She was a shell of her old self. She was anorexic and her mind was diseased. She wasn't thinking like the mom who raised me. In fact, that person had already left.

I wish I knew more about all the moments that led up to that day. I wish I knew more about her childhood. She only briefly told me stories of alcoholism and abuse, emotional and physical. I wish she could tell me now. I can only assume that she must not have felt valued. She must not have experienced unconditional love. She must have felt worthless. She must have felt like it was her fault, like she wasn't good enough. I had no idea what all her demons looked like. To me, I just saw this strong, outspoken woman who appeared to have it all together and liked to boss me around. But on the inside, she was this broken little girl, always fighting to be enough.

My mom loved me, this I knew, but we had our fair share of struggles. She overcame a lot, including generational alcoholism that she simply refused to partake in. She escaped the family drama, but not the emotional scars. They lingered on, in her head, until one day, life grew quiet. She reached her breaking point. Her kids were raised, the house was emptying and the quiet was taking over. I think it's when you stop running the race that you realize you never let go of the baton.

We are all carrying a baton. Everyone's looks a little different. Some are gold and flashy, full of material goodness to cover what is hiding underneath. Some are tarnished and battered, no care given to keep it looking nice. Each one tells a different story, full of different layers and each one seems to scream out to the runner whatever battle it holds within. My mom carried a baton that never stopped reminding her that she wasn't good enough.  So did I.

I don't know when I took a piece of her baton and formed it into my own story. A different story, but with the same underlying message. - you aren't good enough. I don't remember one defining moment. It was simply a slow progression of hundreds of cuts that eventually formed one big scar.

I do remember when I determined that baton had to go. I would like to think it was when she died, that I had an epiphany of self-awareness that would bring me out of my cloud and back to my true identity. It wasn't. Even then, I wasn't ready. I needed more bruises and scars to get there.

My first marriage, which lasted for 22 years, was a mess. It was full of neglect and dysfunction. My mom may have escaped the alcoholism, but I unknowingly decided I didn't want to skip that part of our story. So, I married a narcissistic alcoholic, someone completely incapable of giving me the sustainable love I desperately desired.

I was a classic enabler and codependent. My boundaries were weak and my identity and confidence even weaker. I wasn't short on being mouthy, but I was short on believing that I truly could find and do better. I accepted the love I thought I deserved and to escape that lack of love, I became very busy. A busy body meant a tired body. A tired body meant falling asleep quickly so you couldn't feel the weight of the baton in your hand. Just like my mom discovered though, the baton would one day grow too heavy. It's only a matter of time before you can't handle the weight of it any longer.

It's weight become apparent when my husband filed for divorce in 2012. It was my awakening, my saving grace. I had been trapped for far too long. I had become bitter and resentful. I felt imprisoned and lost. My ex leaving was the best and most loving thing he could have ever given me, even if he left me for dead.

I was forced to rebuild. The rebuilding gave me the chance to build my life on the right foundation this time. I read self-help books veraciously. I grew my relationship with God. I looked inward constantly. I grew. I forgave. I grew some more. I forgave some more. I meditated. I prayed and then one day, I looked up and realized, I had done it. I had not only arrived, but I was no longer carrying that worthless baton. My identity no longer existed in other people. It no longer depended on the approval of others. I had lost everything, but found everything all at the same time.

That worthless baton that my Mom carried had simply been passed down, from one generation to the other, leaving a line of victims in its wake. After she died, its voice seemed to grow louder. "If you had been a better daughter, you could have saved her. If you had seen the obvious signs; if you lived closer; if you were enough, your mom wouldn't have left you."

When my husband left, it told me I hadn't been a good enough wife or a person. "You deserve this. You were never good enough for him. He never loved you enough to change or give you what you asked for."

When my oldest daughter cut me from her life, without cause or warning, it began to scream at me the loudest. I could take the taunts of "bad daughter" or even "bad wife," but "bad mother" was a low blow. It was my favorite role. It was when I felt the closest to Jesus. It was when I knew what unconditional love felt like.

That moment in time was when I hit my tipping point. When I knew that the baton had to go, or I wasn't going to make it past 50 either.

My last moment with that baton, before I began my aggressive journey to drop it and to not pick it back up again, started in a gas station parking lot. I, by complete chance, saw my oldest daughter at this particular gas station. When I saw her, I expected a beautiful reunion. She would come to her senses, see me and rush into my arms while we had a tender Hallmark moment together.

I got the opposite. She saw me, turned and ran as fast as she could in the other direction. She wanted absolutely nothing to do with me, and I shattered open like a fragile china doll that just fell from the top shelf.

I wailed like a howling hyena as I drove home. My biggest fear had come true. I had lost a child, maybe not physically, but she was lost. She simply became another human who I desperately loved, but could never please and who willfully bid me goodbye. The baton began to scream "You aren't good enough for anyone. You are even a horrible mother! This doesn't happen to good mothers!"

With the vision, came the words, "It's not you. It's them." It was always about them. My beautiful mother never felt like enough. She couldn't make me feel enough when she didn't have it herself. My ex husband couldn't give me the love I needed, because he didn't have the love he needed. When my daughter left, it wasn't because I wasn't good enough. It was because she didn't feel good enough. I had inadvertently passed her the baton also. That stupid worthless baton that doesn't belong on this earth, let alone in anyone's hands, now sits with my daughter and the only thing I can do to help her conquer it is to surrender and pray.

In the meantime, it's been over a year since that gas station awakening. My daughter hasn't come back, and she may never, but the message I received that day let me find my way back. It let me put down the baton. It told me that it was never about me. I am good enough. Mom you always were too. I wish you knew that, but I figured it out for the both of us. 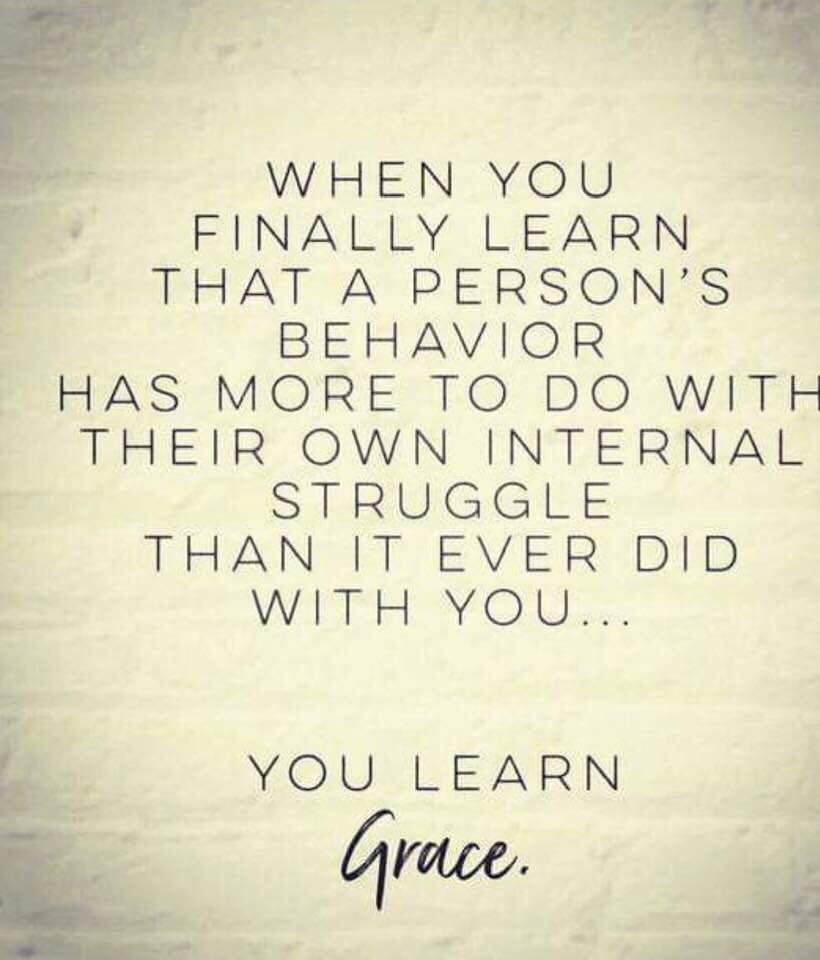 Angela Miller is a Professional Life Coach passionately pursuing her purpose to help others remember who they are and how to become their best self. For more information, visit www.soaringforward.com.

08Oct
Is Social Media Affecting Your Mental Health?
09Oct
What are you feeding your inner wolf?
30Oct
Grief - The price of Love
Comments