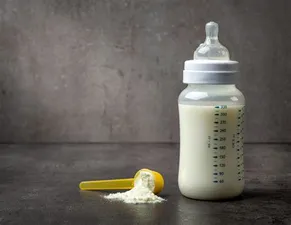 Skyrocketing prices and food shortages are already looming, and are likely to become worse in the coming months. At present, many parents across the U.S. are running from store to store in search of baby formula and finding only empty shelves. How did this happen?

The shortage, it turns out, stems from the fact that the U.S. Food and Drug Administration shut down Abbott Nutrition’s facility in Sturgis, Michigan, back in mid-February 2022, after five infants were reportedly sickened with Cronobacter and Salmonella infections.1 Two of the babies died.February 17, 2022, Abbott voluntarily recalled Similac, Alimentum and EleCare powdered formulas manufactured in the Sturgis facility. According to the FDA, the Sturgis facility failed inspection and was ordered to halt production until required sanitary measures were carried out. The FDA inspection came on the heels of a whistleblower report,2 submitted to the FDA in October 2021, alleging several health and safety compliance issues at the Sturgis facility, including falsification of records; release of untested formula; undermining of an FDA audit in 2019; lax cleaning processes; and the failure to adequately trace its products. Some members of Congress are now calling for an investigation to determine whether the FDA took sufficiently prompt action after receiving this information.3,4

May 16, 2022, the Biden administration announced5 it had reached a deal to reopen the Abbott plant in about two weeks, which should result in shelves being restocked in another six to eight weeks, but while that may solve the problem in the short term, it does nothing to address the underlying problem, which is the fact that the U.S. baby formula market is monopolized by three companies.6Regulatory red tape also prevents the import of infant formula from other countries. As reported by The Defender:7

“The $45.4 billion U.S. baby formula market is controlled by three companies — Abbott, Mead Johnson and Gerber. A 2011 market analysis8 by the U.S. Department of Agriculture (USDA) shows these companies accounted for nearly all U.S. formula sales ...

Abbott Nutrition ... dominates the market — the company’s sales accounted for roughly 43% of the formula market ... according to a 2011 USDA report, which contains the latest available figures ...

FDA regulations for baby formula9 make it nearly impossible for parents in the U.S. to buy infant formula produced outside the country ... The issue is this: FDA rules bar formula imports from Europe if the product does not have FDA-compliant nutritional labels.

The formula may be perfectly safe and produced in accordance with European standards that are at least as stringent as U.S. health and safety requirements, but it can’t be imported because the FDA has not reviewed and approved what is printed on the package — a costly and time-consuming process for producers.”

US Response to the Crisis

House Democrats have now approved an emergency spending bill to allocate another $28 million to the FDA to allow it to hire more inspectors and prepare for future baby formula shortages. Some Republicans voiced opposition to the bill, saying it doesn’t contain any instructions for how the money is actually supposed to be spent, which would likely render it ineffective,10 and as of this writing, it’s still uncertain whether the bill will pass the Senate.11May 18, 2022, Biden invoked the Defense Production Act to increase production.12 The law allows the president to compel companies that supply various formula ingredients to prioritize the needs of formula manufacturers over other customers.

Commercial aircraft owned by the U.S. Defense Department will reportedly be deployed to pick up formula overseas and fly it back to the U.S., in an operation dubbed “Operation Fly Formula.” DoD contracts with other commercial air cargo will also be used to speed up imports and distribution. That same day, the House also passed bipartisan legislation to allow WIC recipients to purchase any brand of formula.13 The Biden administration has also promised to crack down on price gouging to discourage hoarding and reselling at higher prices.14While that’s all well and good, but the Biden administration was initially criticized for its tone-deaf response to the crisis. In “The Jimmy Dore Show” episode featured above, Dore replays Jen Psaki’s response to a reporter who asks where parents should turn if they cannot find formula for their babies. Psaki suggested they call their pediatrician. And then what? What is the pediatrician supposed to do about it? Manufacture baby food? Do they have some sort of magic wand? Dore also points out she’s apparently unaware that millions of parents are uninsured or underinsured, and can’t afford to pay for pediatric visits to ask about how to feed their babies.

Three key factors have contributed to the current disaster, and none is being properly addressed. First of all, the market has been allowed to be monopolized by so few companies that the takedown of a single plant has the ability to threaten the lives of millions of babies. Adding insult to injury, our corporate-captured government has implemented labeling regulations that effectively ban foreign imports of formula, even if they meet or exceed FDA nutritional requirements.

Science — to say nothing of common sense — has been ignored for decades and corporate greed has been allowed to dictate infant nutrition instead. Absolutely nothing can compare to breast milk, yet people have been brainwashed into thinking that manmade formula is better, and that breast feeding is somehow undignified and unnecessary.

Far more importantly than either of those, however, is the fact that science — to say nothing of common sense — has been ignored for decades and corporate greed has been allowed to dictate infant nutrition instead. Absolutely nothing can compare to breast milk, yet people have been brainwashed into thinking that manmade formula is better, and that breast feeding is somehow undignified and unnecessary.

Formula offered greater freedom for busy moms, and the promotion of the obnoxious idea that breastfeeding in public is shameful fueled the transition, making more moms defer to the bottle rather than their breasts. For years, women could even be fined for "public indecency" if caught breastfeeding in public. Were breastfeeding the norm, the country wouldn’t be in a panic over low inventory of infant formula. Many children would also enjoy better health overall.

The sad reality is that most commercial infant formula is complete junk food. Most contain shocking amounts of sugar — typically in the form of corn syrup, which is the worst of all — and even far worse ingredients, including large amounts of dangerous linoleic acid from soy (the risks of which I detail in “Infant Soy Formula — A Risky Public Experiment”) and genetically modified ingredients (reviewed in this 2012 article). Infant formulas have also been found to contain hazardous contaminants, including glyphosate15 and perchlorate (rocket fuel).

We’re now also hearing about artificial breast milk, a brand-new industry heavily funded by Bill Gates, Jeff Bezos and Mark Zuckerberg. A company called Biomilq is trying to create artificial breast milk from cultured human mammary cells.16 What could possibly go wrong with that? As of yet, however, artificial breast milk is not commercially available, so that’s a concern for another day.All of that said, as it stands, the formula shortage is an absolute disaster, because while breastfeeding is the perfect option for most new mothers, it’s certainly not an option for anyone who didn’t breastfeed from the start, or who hasn’t breastfed for a number of weeks or months. You can’t just restart lactation at will. For that reason, telling mothers who already rely on formula to “just breastfeed” is ridiculous, because they can’t.

If you are a new mother and still lactating, then giving breastfeeding a try would be your best bet at this point. Breastfeeding has several benefits over formula,17 including reducing your baby’s risk of dying,18 improving your baby’s microbiome, thereby lowering their risk of obesity, diabetes and cardiovascular disease later in life.19Exclusively breastfed babies also tend to have higher IQs than formula-fed babies.20 For an even more comprehensive list of benefits for both the baby and mother, see my 2018 article, “The US Campaign Against Breastfeeding.”

How to Make Homemade Formula

If the opportunity to breastfeed has already passed, your next-best option is to make your own infant formula.21 The Weston A. Price Foundation has been a leader in this for years. In the video above, former Weston A. Price chapter leader Sarah Pope demonstrates how to make the formula created by Mary Enig, Ph.D., published in the book, “Nourishing Traditions.”However, based on my research into linoleic acid (LA), iron and other components, I have revised Enig’s original formula (which you can find on the Weston A. Price Foundation’s website22). In my view, it’s really crucial to NOT include any kind of iron or seed oils with high LA content, for all the reasons detailed in “Iron Overload Destroys Mitochondria and Sabotages Health” and “How Linoleic Acid Wrecks Your Health.”I don’t have any children, but if I did and the child’s mother could not breastfeed, I would never use commercial infant formula as the recipe below is decidedly superior to commercial formulas and will give your child a major head start in life and preserve their health.

This recipe will make 36 ounces. Place all ingredients in a clean glass or stainless steel container and mix well. To ensure your mixing bowl is properly sanitized, place it in boiling hot water for a few minutes. Remove with tongs and let fully cool before using. To serve the formula, pour 6 to 8 ounces into a sanitized glass baby bottle, attach the nipple and set it in a pot of simmering water. Heat until the formula is warm but not hot to the touch. Always check the temperature of the formula before feeding using either the back of your hand or your tongue. Never ever heat formula in a microwave oven. You’ll need to make a batch every other day or so, but the formula can be frozen so you have a stash for emergencies.

If your baby has a milk allergy, you can make a liver-based formula as follows. This recipe, again revised from the original Weston A. Price recipe to remove iron and seed oils, will make 36 ounces:

Procedure: Gently simmer the liver in the broth until fully cooked through. Liquefy the liver using a handheld blender or food processor. Once cooled, stir in all the remaining ingredients. Store in a sanitized glass or stainless steel container.

To make homemade whey, start with plain unsweetened yogurt, raw milk or cultured milk. Rest a large strainer lined with a clean linen kitchen towel or several layers of cheese cloth over a bowl.If you’re using yogurt, place 2 quarts in the towel-lined strainer. Cover with a large plate and leave at room temperature overnight. The whey will drip out into the bowl. Place the whey in sanitized glass jars and store in the refrigerator. If you are using raw or cultured milk, place 2 quarts of the milk in a glass container and leave at room temperature for two to four days until the milk separates into curds and whey. At that point, pour the mixture into the towel-lined strainer and cover with a plate. Leave at room temperature overnight to separate the whey from the curd. (The whey will drip out into the bowl.) Store in clean glass jars in the refrigerator.